It stole the show at Volksworld 2015 and in between completing a 13.6 quarter mile at VW Action was named ‘Europe’s most beautiful VW’. We’re talking, of course, about VW Heritage customer Neil Ellis’s ’58 (1959 model) Ragtop Beetle. Neil gave us an exclusive insight into how this amazing creation came together…

Neil spotted the unloved 1959 RHD Bug back in 2008 hidden away in the corner of a friend’s bodyshop. He’d always hankered after an early ‘58-‘59 crossover, so he made some enquiries. “I liked the way they retain many of the Oval Beetle features, such as the body pressing and semaphores, but combine a larger back window,” comments Neil. “Thus the deal was done and I brought myself a standard ‘59 RHD Bug.” 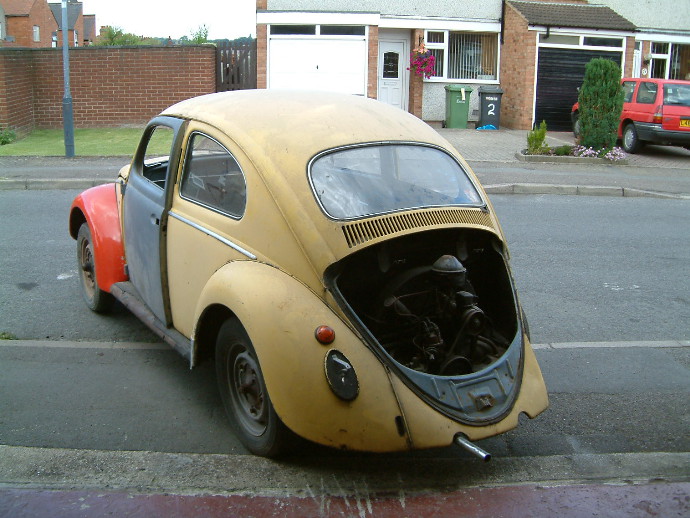 The car would, however, remain far from standard as Neil had always loved the early Cal-look, specifically the early DKP cars with their nose down stance and fat tyres out back, but still retaining full trim, quarter windows and stock paint schemes. “A trip to a Der Kliner Panzer (DKP) meet where I saw Bill Swimmer’s Coral Red ragtop further defined the look I was after – but the only problem was, I decided the car definitely
needed a ragtop.” 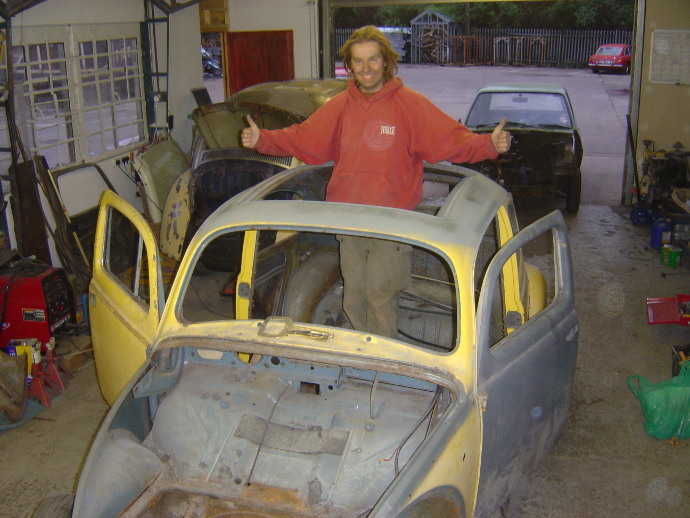 Undeterred by the fact that the car he had brought was a solid roof model, he set about grafting in an original Golde ragtop section. “The welding had begun and there was a lot of it!” remembers Neil. “The front nose section, spare wheel well, front valance, rear bumper hangers, rear valance, inner rear arches were just some of the steel work that was replaced, with the majority of the work being undertaken by yours truly.” The task of painting the car and a few bits of welding was passed on to Nick and Stevo at Double H Restorations, who, it has to be said, did an amazing job. 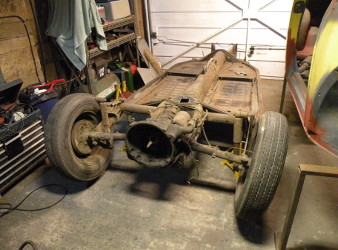 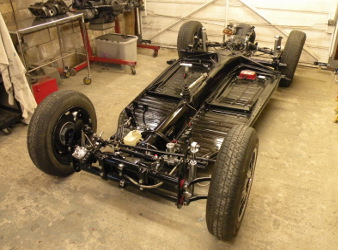 While the body was being worked on Neil got busy building up the floorpan, implementing a number of modifications in the process. The beam was narrowed by 4in, the front drum brakes were changed for later discs and aftermarket CB Performance discs were fitted at the back. The car runs on gorgeous genuine magnesium Gasburners, and these are wrapped in M&H treaded slicks at the rear. The gearbox is a standard ratio heavy duty built ‘box supplied by Bear Motorsport. “To list all the items VW Heritage supplied for the chassis during the build would take pages, but suffice to say it’s where I sourced the vast majority of components,” confirms Neil. 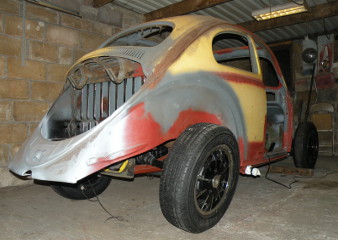 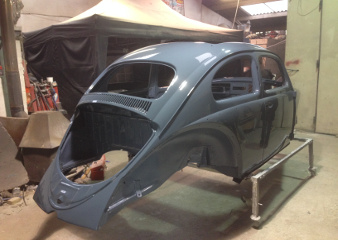 Following the trial build the chassis was stripped down, undersealed and painted to an amazing standard again by Double H Restorations before it was finally built back up again. All the fittings are either stainless or high tensile steel. Once the chassis was finished the body was carefully fitted back on so that the final build could begin. “This is where VW Heritage really came into play, supplying all of the widow seals, much of the body trim and a whole host of other items.” 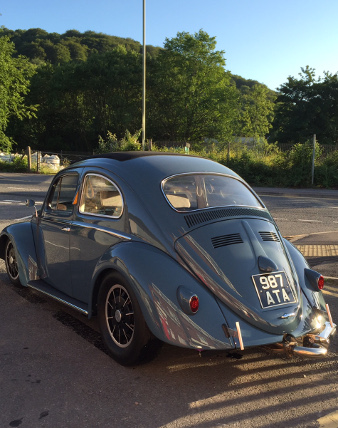 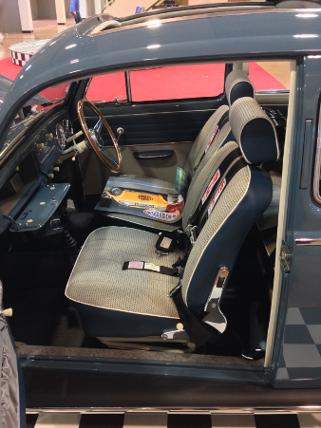 The interior is pretty stock, and features a standard blue/grey style interior. However, there are some subtle changes worth noting; the front seats have been replaced with Porsche 912 pews, and a full set of period gauges appear in the dashboard. The standard speedo has even been rebuilt to read to 120mph and a full five-point harness has been fitted for extra security. 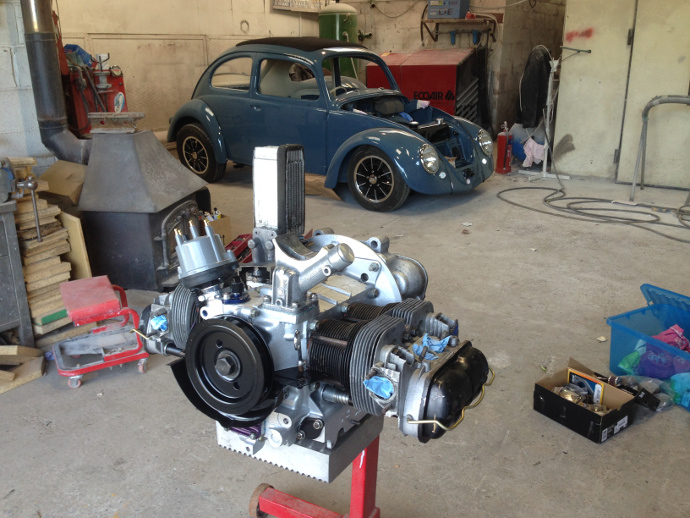 The 2276cc engine in the car is built around a 82mm DPR crank, Scat H beam rods, CB 044 heads, a FK87 camshaft, all fed by 48 IDAs on short BERG manifolds. Meanwhile, ignition is taken care of by an electronic MSD system. The exhaust is a 13/4-inch merged work of art, expertly built by Rich at Turbo Thomas Exhausts. 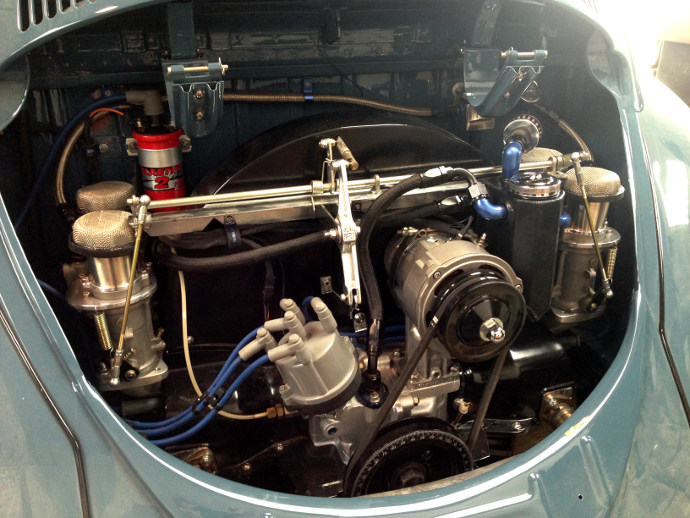 With the project completed, Neil was over the moon to be invited to the Volksworld Show, especially as they had accepted the car based only on a few photos of the shell in final paint. “It was literally finished the day before the show,” recalls Neil. “And to be honest it wouldn’t have been possible without the help of VW Heritage who sent a constant flow of parts in the final few weeks.” But not only did Neil get to show his car but he also won Best of Show! “I still can’t quite believe it!” he smiles. “However, it wasn’t built as a show car, and since then I have ran it at Santa Pod Raceway running a best time of 13.6 at 96mph on the quarter of a mile.” 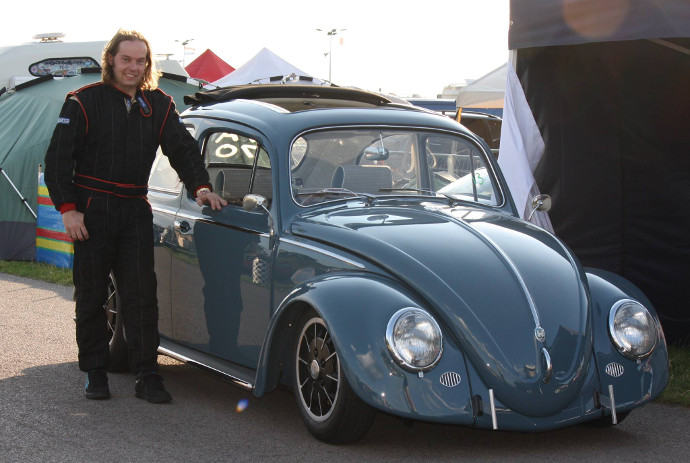 So not only has Neil created one of the coolest looking retro Bugs currently on the scene, but also one that’s pretty damned quick off the mark too! Great job! You can find out more on Neil’s 58 Ragtop site here.