There’s drag strips up and down the country echoing with the sound of screaming VW engines, with owners putting their cars and their drag racing techniques to the test. If you fancy having a go VW drag racing, here’s what you need to know…

Volkswagen enthusiasts thinking of getting involved in drag racing are at a huge advantage because, guess what? There’s a dedicated club, the Volkswagen Drag Racing Club (VWDRC), on hand to offer newbies help, support and all the necessary advice to help you get off the starting line. Members of the VWDRC, one of the oldest and biggest single marque drag racing clubs in the world, have been racing their VWs, Audis, Skodas, Seats, Bugattis and Bentleys for over three decades, and if you rock up at Santa Pod or any of the UK’s other drag strips, you’re sure to come across one of their cars being put through its paces on the quarter mile.
Said Abi Tether from VWDRC: “People’s interest in drag racing stems from car enthusiasts wanting to know what their car would and can do and share that information with like minded people, and to ask themselves if the personal touches they have made improved it from how it left the factory?”

She added: “In terms of VWs and drag racing, I think there’s an element of historical significance to it  right the way back to the early days of the ‘New Wave’ VW shows of the 1980s. The first Bug Jam in 1987, was a way for VW enthusiasts to all come together and celebrate in the same way as veedubbers in California did, and the VWDRC was born to enable VW enthusiasts here to emulate their heroes in California who were taking on the much bigger, more established V8s in their VWs. In more recent times, the club has seen an increase in membership from the water-cooled VW fraternity but at the root of it all still is the fact that enthusiasts like to test themselves and their skills against their peers.. or simply to brag in the pub! 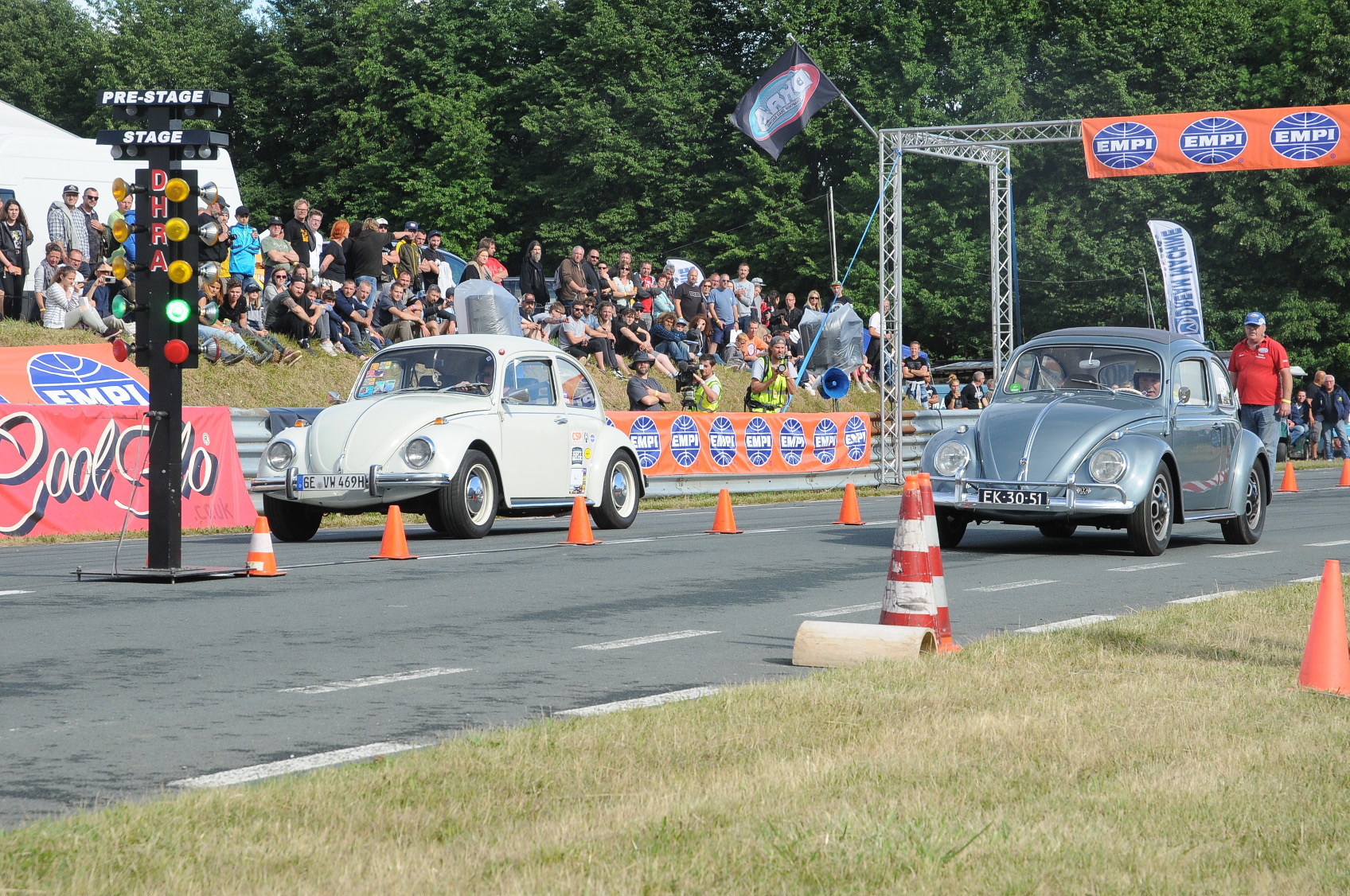 If you want to have a go yourself, the good news is that you don’t need an expensive, specially prepared pro-race car to do it. As Abi confirms: “It’s easy to take part, it’s not a ‘chequebook’ formula where you simply can win by having the most money – it’s about your own skill as a driver, and knowing the car you drive. The only downside is that it’s addictive!”

Rock up and race with RWYB

And it really is easy to get started. As long as your vehicle is street legal, taxed, has an MoT and you’ve got a valid driving licence, then you are ready to roll in a ‘run what ya brung’ or RWYB event. At Santa Pod, for example, you will typically pay £10 for admission, then a further £25 signing on fee. For this you will be entitled to unlimited runs and you will be presented with a personal performance print-out showing your reaction times to the start lights, 60ft, quarter mile, eight of a mile times and terminal speed. If you’re in an open top car or one that does 110mph or more at the finish line, then you’ll need a helmet as well. 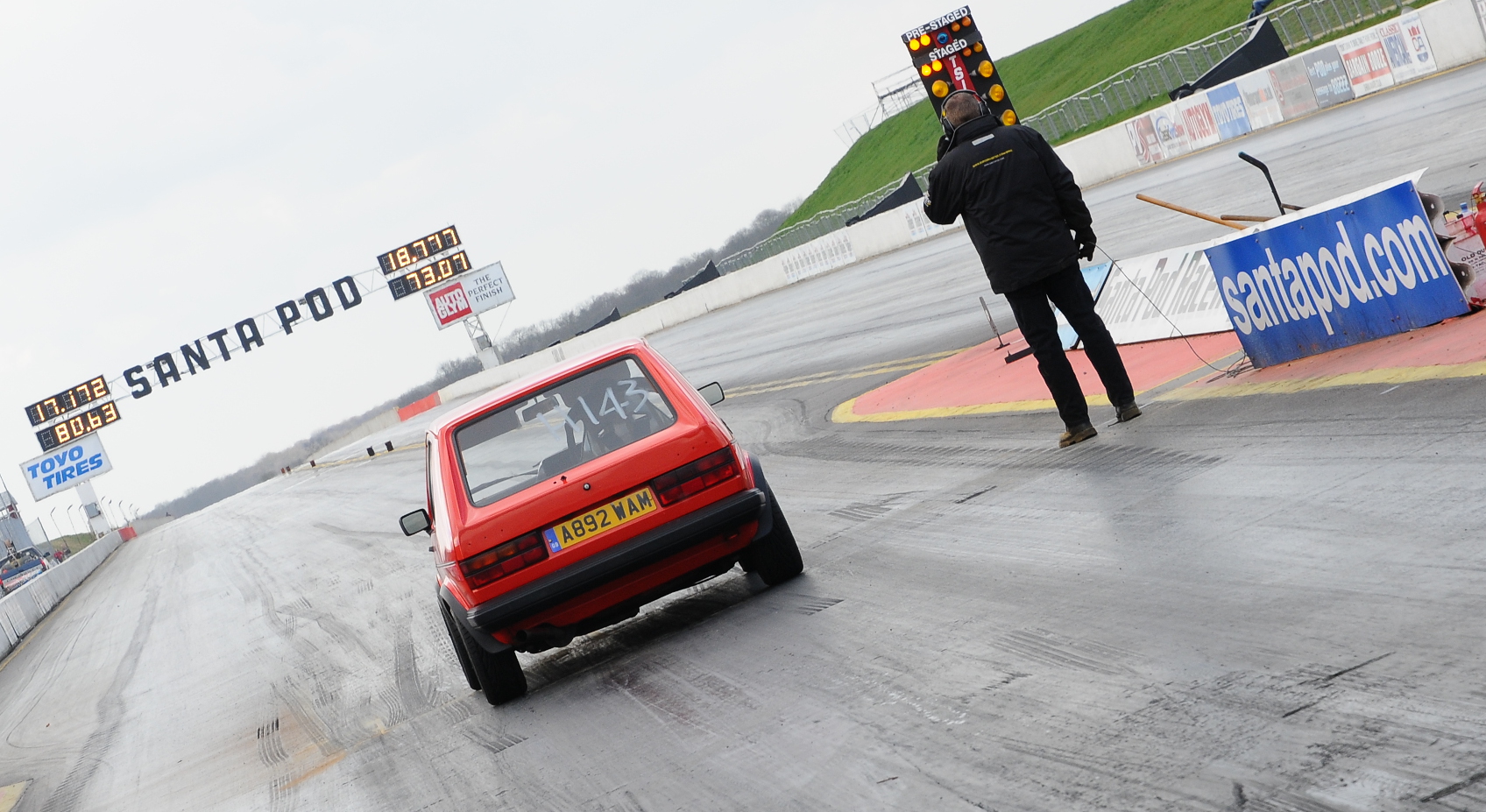 The best advice is to go along to a few sessions as a spectator first. But, to give you a quick heads up, this is the general procedure. First, check your car over – make sure the brakes pull up in a straight line, all the tyre pressures are correct and you’ve got enough fuel (around a quarter of a tank is best). You then make your way to the staging lanes. When it’s your turn, make your way to the end of the dragstrip; if you’ve got a roadcar, drive around the ‘water box’, which is the wet area for doing burnouts to warm up slicks.

When the light goes green…

Following the track marshall’s instructions at all times, make your way to the start line and watch the ‘Christmas Tree’. You roll forward until the top ‘pre-stage’ bulbs are lit – you’ll be close to the start line by now. Continue forward until the second set of lights immediately below show, then stop. Depending on the tree, either all three amber bulbs will light at once followed 0.4 seconds later by the green (pro-tree), or the three amber bulbs will flash consecutively 0.5 apart before the green light comes on 0.5 seconds after the last amber light (Sportsman or Full tree). When the green light comes on – you go! You keep going flat out until you cross the finish line. Again, go along and see what other racers do, learn the drill, before having a stab at it yourself. 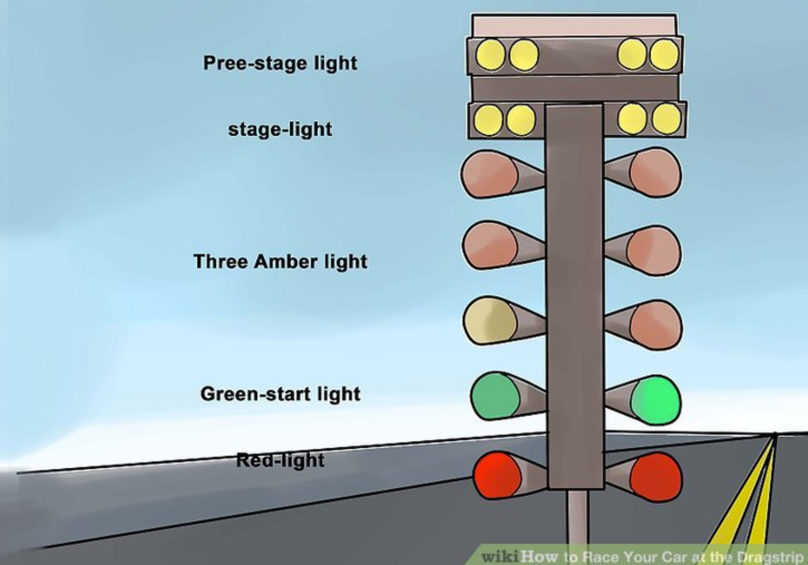 Serious about the strip?

If you want to compete against others, things get a little more involved. You’ll need to join a drag racing club, like the VWDRC, become a member of Santa Pod Racers Club or Avon Park International Racing Association and get an MSA licence. We did a blog story which looked at how to apply for different race licences here. You’ll also need a helmet, race suit, race gloves, race shoes and a fire extinguisher as a minimum requirement. With the VWDRC there are two classes – Sportsman and Pro., but as long as you are running a VAG engine, you can qualify for both. If your car is running quarter mile times of 12.99 seconds or less, you get placed in the pro class, 13 and slower and you race in the Sportsman class. 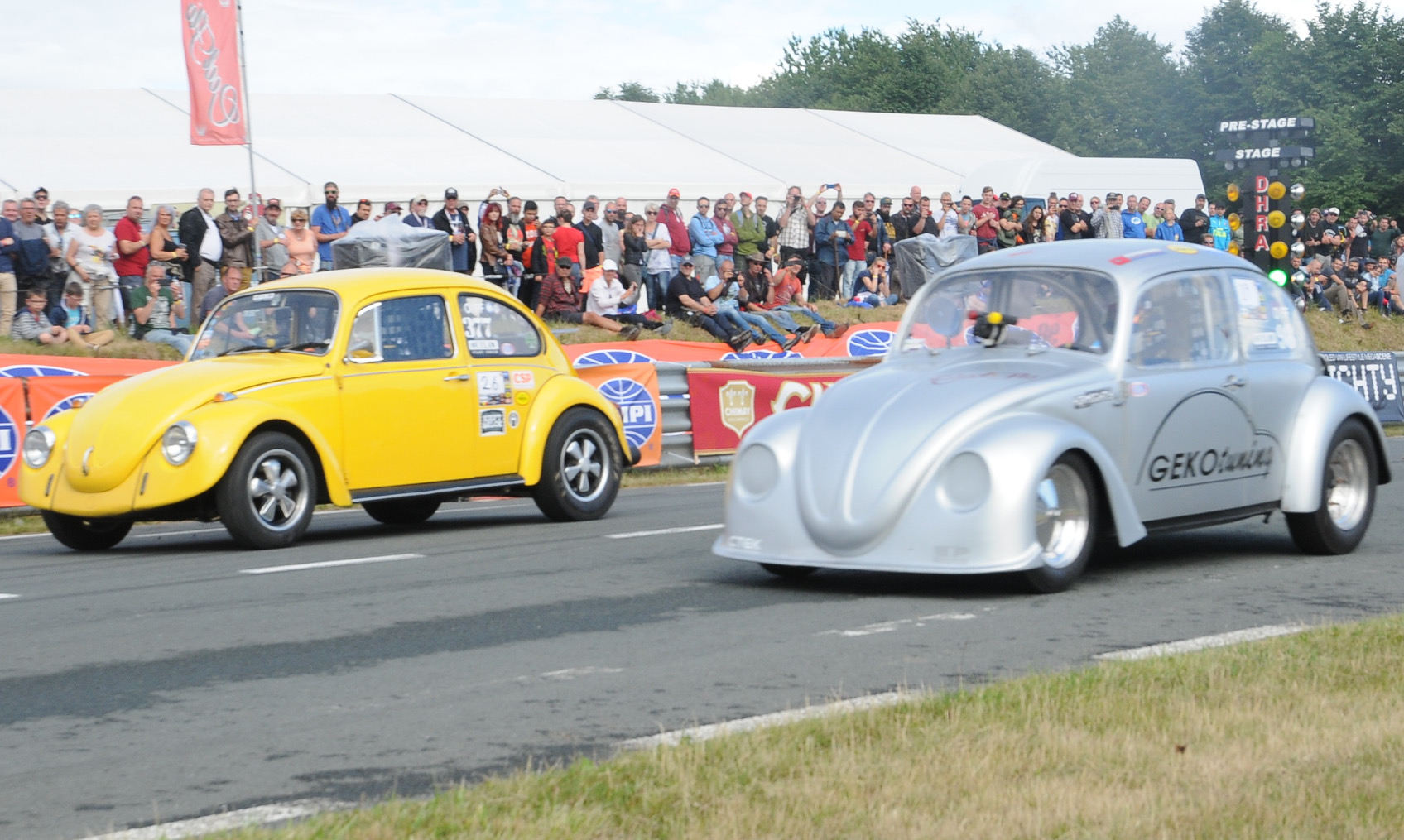 If you’re concerned about coming up against much quicker cars all the time, worry not because there’s a thing called ‘bracket racing’ which serves to level the playing field. Here, a series of qualifying passes are made so an average time for the quarter mile can be attained. This is then dialled into the ‘Christmas Tree’ so the slower car leaves first. If both drivers run their perfect ‘dial in’ time they will cross the line at precisely the same time. Of course that rarely happens because the skill comes in being consistent, getting the gearchanges right and reacting quickly to the green light…

Bare in mind, if you do get involved in VW drag racing you can be assured of one thing. You’ll be spending your weekends with like-minded people, learn an awful lot about your car, have fun trying to make it go faster – and have an absolute ball while you are doing it.