We’ve all got our impressions, albeit a tad weighted if we’re honest, about the virtues of the excellent Mk2 Scirocco. But we thought it would be interesting to look back at what contemporary reviewers thought of it at the time. And, more fascinatingly still, how it ranked against its hairier turbocharged rivals back in the mid-‘80s…

Volkswagen Scirocco GTX, Nissan Silvia Turbo, Renault Fuego Turbo. It was quite a contest when CAR magazine pitched this eclectic mix of hot coupés against each other in their June 1985 issue. But when they wrote, “This trio are all good cars, but one stands out from the others…” for a split second we became anxious that they were indeed talking about the now classic VW. 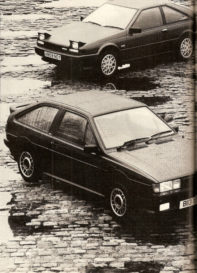 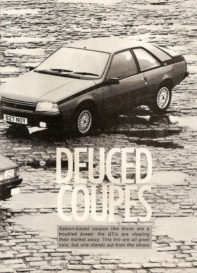 Handling-wise, despite acknowledging the fact that, traditionally, rear-drive cars ultimately handled and gripped better than a front drive car, the reviewers recognised this had all changed with the evolution of better front-wheel drive systems. They described the Nissan as “oddly unstable” in a straight line and prone to understeer, while more praise was heaped on the Renault whose layout and geometry they described as “excellent.” To be honest, they weren’t all that complementary about the ‘Rocco’s set-up, which they described as being “vague and lacking in feel”. On a plus side, they said it was responsive and eager to corner fast. A draw then perhaps with the Renault. 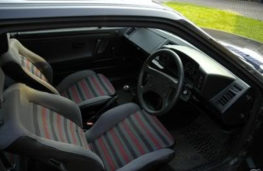 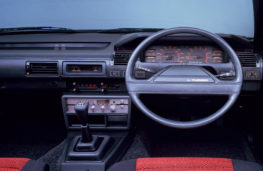 They liked the generous lateral support in the Scirocco’s driver’s seat, and found the Nissan’s pews the least supportive. As for ride quality, the Nissan came in for a lot of stick which, as they put it, “has a lot of roll stiffness, but has bump-thump at low speed” whatever that meant. The Renault, they said, had a poor quality high speed ride and said this was a criticism also of the VW, which could “become oddly bumpy when running fast.” The Fuego was the noisiest car, the Nissan the most difficult to drive smoothly. Reassuringly, the Scirocco’s engine got a succinct nod of approval, CAR describing thus: “it’s never noisy – it hums, but never howls.”

Meanwhile, the Nissan was the most roomy while a comment was made about the VW’s lack of headroom and the fact the steering wheel position didn’t allow enough room to initiate ‘heel and toe’ downchanging. Remember, this was written back in the ‘80s by old school motoring journalists when the likes of William Woollard were still presenting Top Gear. 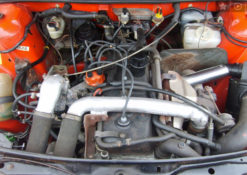 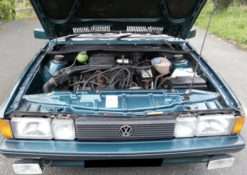 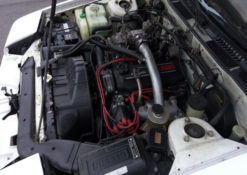 Towards the end of what they’d billed as the ‘Giant Test’ they got to the grist of the matter; driver appeal. For gadget lovers who wanted a lot of equipment for their money, the Nissan would appeal, said CAR. They got excited about the Renault’s advanced infra-red remote central locking, its generous instrumentation – and its Italian air horns of all things. Worryingly, “After these two, the Scirocco seems stark,” it concluded. Describing the VW’s showroom appeal as being “restricted in typical German style, with an apparent minimum of instruments – apart from the “unnecessary instant consumption gauge and the more justifiable if argument-provoking economy change-up LED.” The only real plus points were – wait for it – the fact that it had a simple to use trip computer and access to the 22-strong open fuse board was good! Having got this far, we were beginning to wonder whether the conclusion was indeed going to turn out the way we want it to…

So, the final ‘verdict’ was in. The Nissan was good for its power steering and performance, but they didn’t like its poor low speed refinement and lakc of straight line stability. That put it into third. They described the Fuego as ‘fun’ to drive and having an acceptable ride/handling compromise. But other aspects disappointed, such as the ‘awful’ driver’s seat, poor visibility and high levels of road noise. Which just left the GTX…

We won’t leave you in suspense. It won. Describing it as “right in so many important ways,” the reviewers again mentioned its supportive driver’s seat, its responsiveness and its performance. “There is nothing in the turbo world to touch a decent size, normally aspirated engine which works so lustily yet with such refinement; the VW 1.8-litre injection unit is a gem,” they raved. Playing down the vague steering and the lack of proper air-blending heater, they made their final judgement: “the Scirocco wins hands down and adds lustre to its laurels by being easily the least expensive.”

Not only then does the ‘Rocco impress today, but it successfully slayed much more powerful opponents when it was new. Just the result we wanted!

2 responses to: How the Mk2 Scirocco beat its rivals