With the arrival of the T25 in 1980 came the recognition that its slightly more accommodating ‘breeze block’ shape and bigger interior would make it even more useful as a camper than its bay window predecessor. Various firms across the land started kitting them out accordingly, but only a handful of companies got VW’s ‘official’ nod of approval. Here’s a run down of those early pioneers…

As soon as motor caravan sales started on their upward trajectory, a raft of camper conversions became available – but VW decided to give approval to only one. Devon was chosen, and for many years the Devon VW plus the German-built and at the time prohibitively expensive Westfalia were the only official VW-based motor caravans. However, in the early 1980s they took the decision to tap into the market and approve four additional firms to join Devon Conversions as authorised manufacturers, namely Auto-Sleepers, Autohomes, Richard Holdsworth and Danbury. All were well established in the motor caravan business, with Holdsworth and Danbury probably being the most successful and best known of the previously ‘unauthorised’ conversion companies, having already made their mark converting earlier air-cooled VW buses.

Autohomes launched its T25 camper conversions in 1980, initially based on the air-cooled model before the water-cooled 1915cc model became available in 1981. The Kamper was the four-birth rigid side elevating roof version, its four-birth high-top available from 1986 was called the Komet and it two-birth high-top was the Kameo. There was the Karisma two-birth high top roof version which was an upmarket version of the Kameo. The Kamper was offered in Pastel White and Bamboo Yellow initially and had a stainless steel Leisure Princess cooker/sink combo with grille and Electrolux RM122 two-way fridge. With its folding bench seat and various other pews dotted around the interior, some of which were side facing, it could seat seven in total. Timor Beige and Marsala Red were added to the colour options from the mid-1980s. 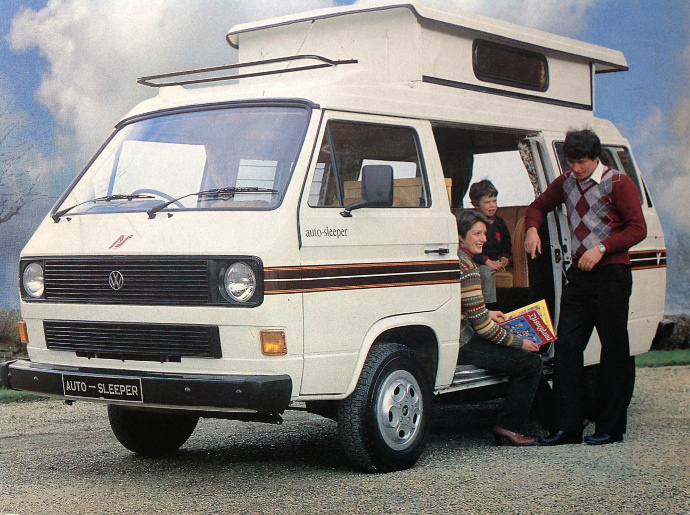 Worcestershire-based Auto-Sleeper had already forged a relationship with VW and offered a conversion for the bigger LT before switching to the T25. Key features included a spring-assisted raising roof, underfloor water tank an opening window by the stainless steel cooker/sink and the usual 2-way fridge. Its U-shaped seating area with a removable table worked well while storage space included various built-in cupboards and a wardrobe in the rear. 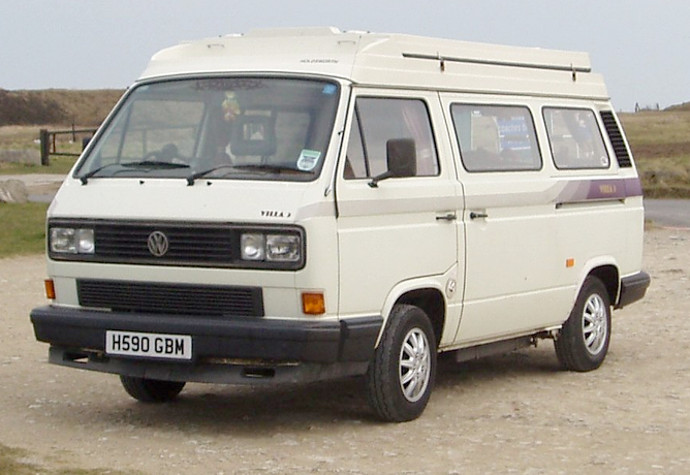 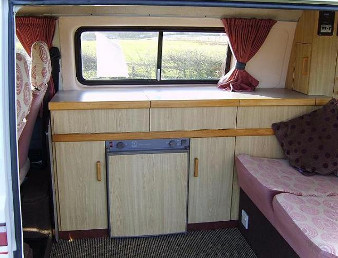 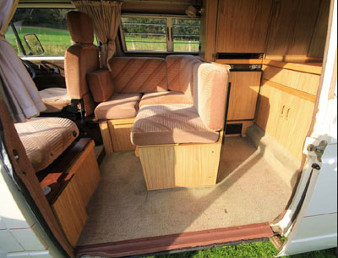 The Villa II can be distinguished by its solid sided roof instead of the original pvc version. The Villa III from 1986 added mains hook up, leisure battery, extra reading lights three-way fridge and a freshwater tank with level guage as well as a better cupboard layout. The range topping Celebrity offered stainless four-burner stove, flyscreens and a better Zig electrical control unit. The Variety’s kitchen layout was bit unusual as it was relocated to the back of the van accompanied by a more flexible seating arrangement. The Vision was a slightly better specced version of the Variety (above right).

Devon, of course, had offered its Moonraker conversions for some time on the Bay, and with the T25 it introduced a new model, the Sunrise, which was similar to the Moonraker with the same side elevating roof, but with a more luxurious finish. Standard colours included Pastel White, Timor Beige and Escorial Green with Medium Blue offered at extra cost. 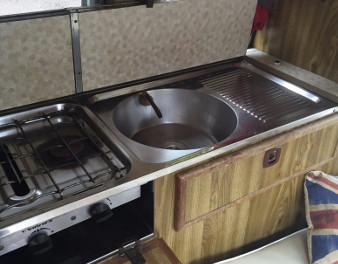 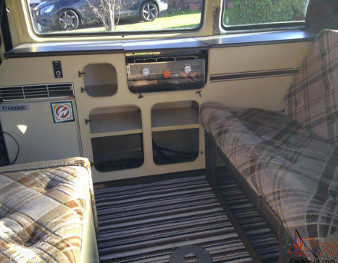 The interior was kitted out in either Golden Dawn or Daybreak Green colour options, with swivel front seats being available as an option. Other spec included a vitreous enamel Optimus 8340 two burner stove with hot plate and a matching enamelled sink and drainer. The usual Electrolux RM212 fridge kept the bacon, eggs and milk cool. Other options included a mains electric package, Model 35 porta potti, extra trim for the cab area, remote gas operated under floor heater, insulated roof, side step, louvered side windows and a cab hammock bunk bed. 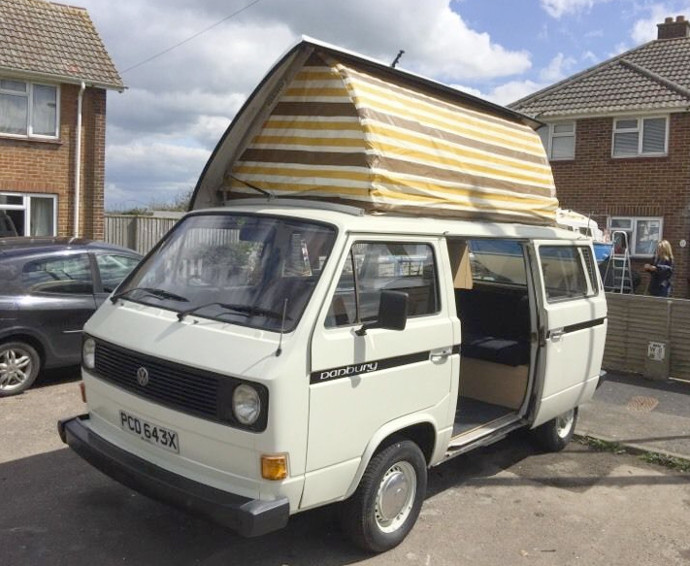 Essex company Danbury again started with the air-cooled T25 before graduating to the water-cooled model. As far as we can gather their first conversion was the 1980 Travelette which featured a series of forward facing seats in the back which converted into either two single beds or a kingsize double. A stainless cooker sat under a front locker while a wash bowl was fitted under the offside single seat. They were only available in Pastel White. The 1981 Danbury Series II had conventional kitchen units down one side which contained the sink, hob and fridge. 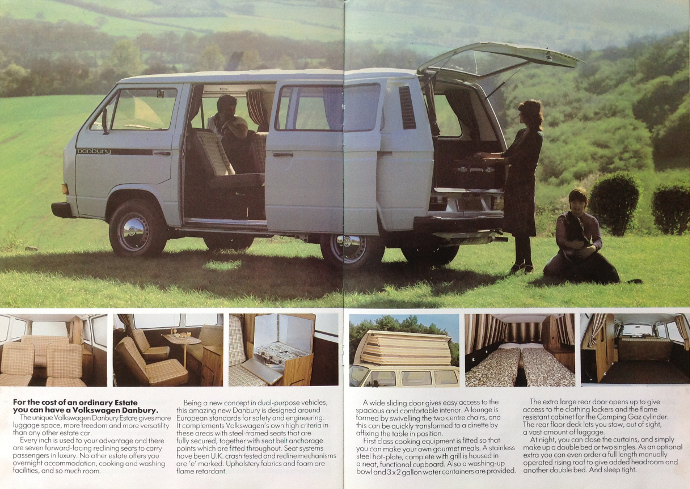 Timor Beige, Bamboo Yellow and Marsala Red were added to the colour options and duo-tone colour schemes were offered at extra cost. The Series II brochure talked about an optional ‘Autoroof’ which, at the push of a button, ‘elevates silently to almost double the interior space as well as give full standing room.’ The six-seater Danbury Showman and Diamond models were based on the Series II but had a few extras, including the Autoroof as standard. There was also a Coronet model from 1984 with swivelling front seats, and from 1986 the appropriately named Luxury Lounger which had an L-shaped rear seat arrangement and from 1988 the six-seater Renegade with its two rear facing buddy seats.

You can find even more useful info about the various conversions on the excellent site here.

Which conversion you choose is all down to personal taste – although to be honest, the condition of the rest of the van will usually be the deciding factor. I had a Holdsworth Villa II and a Westfalia T25 and both worked equally well. In fact, I always thought the Villa was an excellent conversion and loved the fact that there was a custom-made storage space for the porta potti below the rear bench seat. The solid sided roof with its window each side was also a good feature and the fact that the side with the kitchen cabinets fitted didn’t have a rear side window provided a bit of extra privacy. I sold it to buy a Auto-Sleeper T4 and regretted it! But that’s another story.