We’ve all rejoiced recent fuel price drops, but things were very different during World War 2, when petrol was in short supply and most was allocated to the military effort. In Germany it lead to the creation of some mad-looking but totally innovative Volkswagens, some of which we reckon could even make a comeback if pump prices go up again!

Europe suffered a real fuel shortage during WW2, and because Germany had a lot of coal, they even tried gasification to make synthetic fuel. However, a much more ingenious idea was running a car by burning wood…

And this is how it worked. Normally in wood burning fire the wood breaks down chemically when heated and some of the gasses produced are flammable and burn as they are released. Hence the creation of flames.

In the WW2 wood burning vehicles, however, wood was heated to a temperature hot enough to decompose the wood, but the gas was not allowed to burn. Instead, it was stored in a chamber and injected into the cylinders of a standard combustion engine. In a nutshell, the chamber acted like a pressure cooker, with the hot air going through a cooler and a filter and being piped back into the engine where there was a special filter for the carburettor. A fan was needed to keep the combustion process going. And this was the method adopted by Porsche when developing its ‘Holzbrenner’ (wood burning) kits for Volkswagen’s Kdf wagen (Beetle) and Kübelwagen. 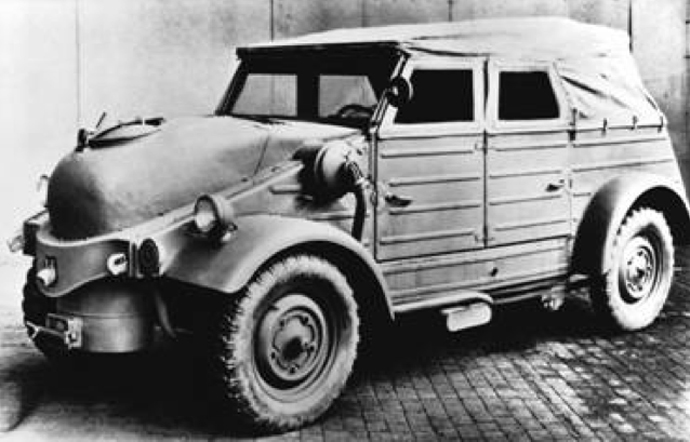 Fuel was supplied at special fuelling stations which sold pre-cut matchstick sized wood chips, with drivers being told to exit every so often from the autobahn to keep the fire burning. You see the exits were cobblestoned, and the vibration served to stoke the ashes!

Rumour has it these bizarre looking beasts with their bulbous front ends were pretty rubbish, being low on power (12bhp is quoted) and the particularly prone to killing the otherwise reliable air-cooled engine in record time. It’s no wonder we can’t trace any survivors…

Nevertheless, it was a clever idea. And very ‘Green’.

3 responses to: Fire up one of these wood burning VWs!