VW shows have changed big time over the last few decades and one much enjoyed relic from the time when tweed jackets and braces were more de rigueur than beanies was the Beetle engine change competition. We got to talk to the Usain Bolt of the engine swap world, current record holder and former Buzzcocks drummer John Maher about life in the fast lane when it came to Bug engine changes…

If like me you struggle to get an air-cooled engine out of a Beetle or Bus and turn the air even more blue when you push, lift, shove and manoeuvre to get it back in again, you’d marvel at the exploits of John Maher. Along with his cohort, Mike Silvester, he set the record at VW Action in 1986 of 1 minute 16 seconds. Yes, that’s right just 76 seconds to get an engine out and back in again… After less than 21 seconds after the start signal they had driven the Beetle on to the ramps, disconnected the wiring, pipes and hoses, taken off all the tinware, undone various bolts and got the engine on the ground. After a short respite, a further 56 seconds was all it took to get the engine back in, fired up and the Beetle rolling forward. Incredible. And if that wasn’t enough, John set the single handed engine change record the same year (below). 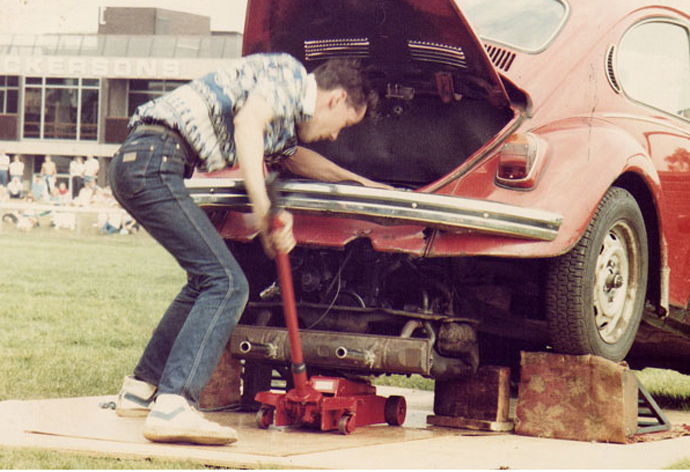 Although the very first engine change competition took place at VW Action back in 1976, John didn’t get the inspiration to have a go himself until a few years later. “The first time I went to Action was in 1981 when it was at Stoneleigh. The engine change competition was the most exciting thing going on at the time, to the point that I decided to have a go a couple of years later with my brother-in-law,” remembers John. “We came last but we learned a few lessons in the process and had another go in ’84 and ’85, finally getting the record in ’86.” The record was formerly held by Mac Howarth and Derek Waugh (below). They clocked 1 minute 34 seconds at Action in 1984. 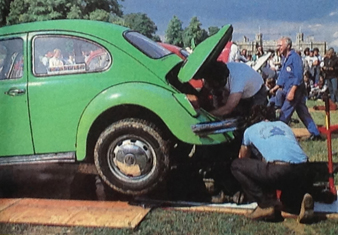 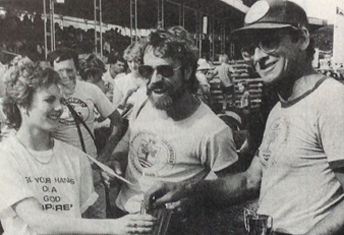 Rules at the time were pretty draconian. All the tinware had to be in place, including the oil filter and engine bay rubber seal. Wing nut style fasteners were allowed on the throttle and heat exchanger cables and a single plug and socket was allowed for the engine wiring which helped. Before and after the competition a scrutineer would check the tightness of all four engine nuts, heater cable clamps and throttle cable clamp. They also checked the heater hoses from the heat exchangers were in place and a 30 second penalty was handed out for each item not sufficiently torqued or present.

Despite this, John still had a few tricks up his sleeve. “All the wiring was run into a trailer plug and socket on the firewall. We had wing nuts on the throttle and heater cables and we used a 1200cc engine because it was narrower, with a 30hp fanshroud and air filter (no paper air hoses to deal with). Also, the fuel pipe was standard push fit onto steel pipe but was connected/reconnected inside the engine bay. Before each engine removal I stacked as many washers as possible on the four engine bolts. The nuts were tight but would take minimal rotation to come off the studs. Each time the engine was removed (we didn’t use a jack – we just let it drop to the floor), a shower of washers would accompany it. I don’t think any of the other teams used this trick. I did the driving and then dived underneath the car to take care of the lower nuts, heater cables and hoses while Mike worked inside the engine bay. By the time he’d undone everything I was ready to grab the tailpipes and yank the engine out. On restart I tipped up the engine while Mike jacked it up so I could slot it home. I did the work under the car while Mike sorted the engine bay again. I jumped in the car and drove it away. Being a lanky bugger, jumping in to the driver’s seat in a hurry to drive it on and off the ramps was a little awkward due to the steering wheel. In the end, I hacked up a stock wheel so it had just a single spoke, pointing directly upward.”

There were other rules to adhere to too, remembers John: “We had to stand behind the car prior to the start. The stopwatch was stopped once the engine was on the ground. For the second stint we again had to be behind the vehicle, not touching the engine or trolley jack. The engine refitment time would cease once the vehicle had been driven forward 1m under its own power.”

The last engine change competition took place in around 1993 and John can’t imagine they’ll ever bring it back. “Interest in the competition waned for me in the late ‘80s as drag racing hit the scene so it didn’t survive the passage of time. I wonder if anyone remembers the engine destruct – that went too (fortunately).”

Although John holds the record it can’t officially be claimed as a ‘world’ record due to different rules being used in other countries. But, said John, “as far as I am concerned, it’s a record that still stands today and to be honest, if someone else wants to have a go and they manage to beat it – they deserve it! I know for sure I’d have absolutely no chance of getting anywhere close to it nowadays!” 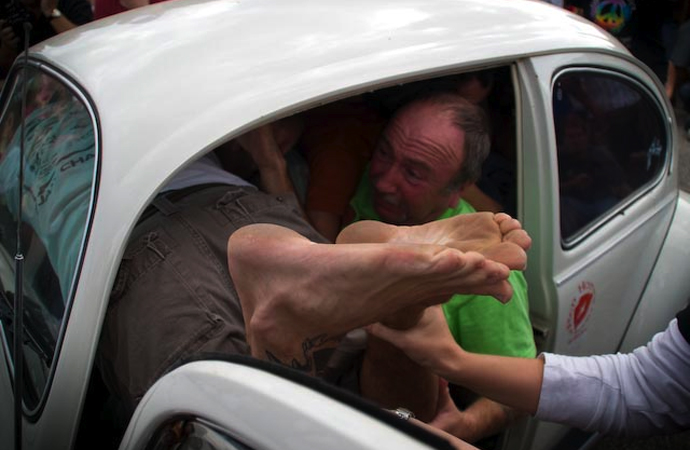 Like other activities such as the lady’s Bugpush, parts identification, bugcrams and Beetle hubcap throwing, the engine change competition is now a distant memory for most of us. Given the sweat, toil and sheer frenetic nature of event – perhaps that’s a good thing. That said, it would certainly make a change from all the tyre kicking that goes on these days – and it would definitely be unique! Shall we bring it back  – what do you think?

3 responses to: Engine change, of the times…