‘A pink bathrobe, a Dukes of Hazzard ashtray, a slightly damaged golf bag, Shatner’s old toupee’ – and now Weird Al Yankovic could add ‘Beetle pile-o-rust’ to the list of useless things in his eBay song because, yes, that’s what’s up for grabs on that famous internet auction site. And incredibly the madcap listing’s already received a handful of bids, with the current amount of £6 expected to be easily exceeded by the time the auction ends on October 28th… 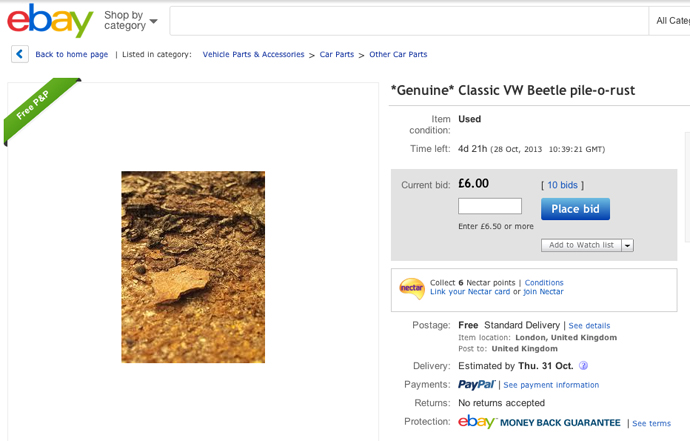 Described by the London-based mystery seller as a ‘slice of motoring history’, the small segment of rust will provide ‘the authentic Beetle owning experience without the need for thousands of pounds, a garage, welder, compressor, angle grinder and all the other little odds and ends that go with owning this classic car.’

Allegedly harvested from an orange 1971 1300 Beetle, the successful bidder for the rust will be the ‘envy of all their friends’ if placed in the centre of their driveway, adds the hopeful vendor.

On a reassuring final note, the seller confirms that he is restoring his Beetle, so advises that there will be a ‘plentiful supply for some months to come.’

Of course we’re dying to know what prompted the cheeky listing, and what state the rest of the Beetle’s in. And actually the likely psychological state of all those who’ve been bidding. We tried to make contact with the vendor, but we suspect they’ve been too busy fielding enquiries, with a number of interested parties asking about the rust’s origins and authenticity.

These are just a few of the many questions that have been flooding in so far….

1) I am very interested in restoring your rusty relic. Can you confirm whether you have the V5 and is this included in the sale? Thanks.

Thanks for your message. Unfortunately the V5 will have to stay with the car I am restoring and the auction is only for the rust that I am finding when stripping it down (and believe me there is going to be a plentiful supply!) Just didn’t want it going to waste when other less fortunate people cannot afford a Beetle, but this will allow them the full Beetle owning experience.

2) Does this come with a certificate of authenticity? How do I know that it isn’t an inferior British Leyland type rust?

No certificate I am afraid but I can provide a Crimestoppers witness-esque video of the rust being removed with someone in an anorak pointing. I can also get my mate dodgy Dave to authenticate the video by signing the top of the DVD (I say sign, he unfortunately lost his arms in a tragic mole wrestling accident so will, instead, just lick the DVD for you)

Yes it would indeed. All you would need to do is spread this liberally underneath the carpet for that ‘extra crunchy’ vintage feel. Alternatively you could also mix it with some Dove moisturiser to create a fantastic exfoliator and self tan combo. This colour is, I believe, popular with people in Essex.

4) Do you have a ‘Buy it now’ price or are you open to offers? How genuine VW is it, does it have any identification or authorised provenance?

There is no ‘Buy it now’ as I would like to let the auction run and give everyone a chance of owning this piece of motoring history. There can be video evidence of the rust being removed from the car and I am yet to hear from VW about my request for a certificate of authenticity. I can, however, get a certificate signed for by not the guy next door but the guy next door to him if that would provide piece on mind for you.

5) Is this right-hand drive and does it need much work to pass the next MoT? Are there any spares that come with it, for example a large chunk of filler or even some used gaffer tape?

Hi there, the rust is right-hand drive and actually comes with a valid MoT (from dodgy Dave’s motors in Dodge Town). If it goes for the right price I will throw in some filler, some green putty looking stuff that I have yet to identify and a petrol receipt from 1984. Don’t forget rust is lighter than carbon fibre!

6) Do you have additional photos of the sale item as it’s very hard to see what’s included in the sale and what’s not.

I don’t have any other pictures I am afraid but can assure you that it will be 100% rust and no additives or extra ingredients such as filler, carpet adhesive, small burrowing creatures etc. There may even be remnants of one of the four bolts in the rust as well!

7) Would you be interested in a part exchange for some Splitscreen rust?

Oh yes I would indeed! I have always wanted some splitscreen rust of my own. I can put it on the drive next to my Beetle rust.

8) Hi there, I am a genuine timewaster, and will mess you around. Have you a ‘Buy it now‘ price, so later when I am drunk I can get my two-year old son to push the button, and you can then never hear from me again! How does that sound?

Ah excellent, a genuine timewaster. I am fed up of dealing with wishy-washy timewasters who bid on something and then actually come and collect it… I mean really! Tell you what, how about you arrange a time with me to come and view the rust. I will make sure I am in, make no plans for the rest of the day and then you can not turn up and not have your phone turned on. Let me know if this is ok for you.

9) Can you set my mind at rest before bidding. Is it HPI clear and free from any accident damage? I am after accident free rust only!

Yes, the rust is definitely HPI clear. The rust is also accident free and if you do a quick history check on ‘checkmyrust’ this will set your mind at ease.

10) You don’t mention how large this pile is, how much does it weigh and would it fit into a small hatchback ok regarding collection?

Hello. The pile-o-rust will fit into a small hatchback no problem and I will provide a sturdy carrying receptacle for its transportation. I would recommend bringing a friend with you though. Not to help carry it as it is very light (rust being lighter than carbon fibre) but more for company really.

There’s still time to bid should you wish, check out the full listing at www.ebay.co.uk/itm/Genuine-Classic-VW-Beetle-pile-o-rust-/181243565838, although I suspect there will be other bits of rust coming up for sale very soon given the interest this has received. I guess the only other question I would ask before bidding is, does it have an official VW part number?