Okay, so it’s kind of kitsch cool to have a couple of goldfish swimming around a glass bowl on your mantelpiece, but in a huge 800 gallon fishpond in the back of a VW Bay window bus? You’ve got to be kidding, right? No, actually, and these incredible pictures prove it! 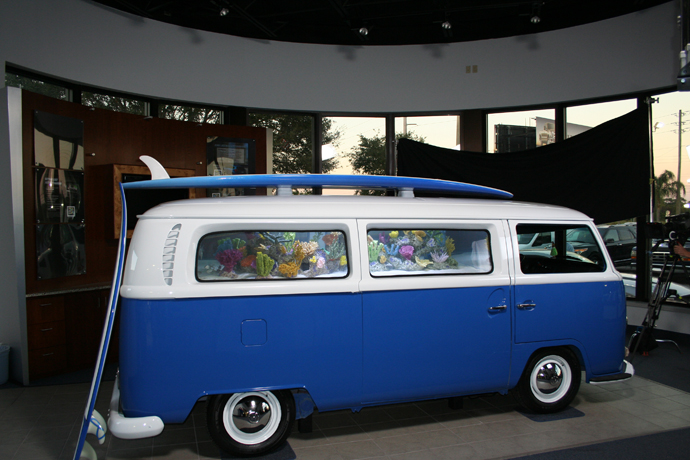 The madcap idea was the brainchild of Mike Wetzel, a saltwater aquarium enthusiast from Florida who also has a penchant for old Dubs and found a fin-tastic way of combining the two interests.

“I did it on a whim, really,” smiles Mike, who happens to be general manager and vice president at a local car dealership. “We acquired a VW franchise and had plans to incorporate a mini Volkswagen museum with vintage Beetles and Buses and needed a centerpiece. Being that we are on the Florida coast, we decided on a surf/beach scene for our showroom – and that’s where the idea came from.”

The bus itself is a 1970 model and unsurprisingly had to undergo a fair bit of fabrication before it could be filled with saltwater and various types of fish indigenous to Florida’s coastal waters. “It was in black primer and would barely run when we bought it,” confirms Mike. “I was going to trailer it down, but one of my drivers wanted to take a trip down nostalgia lane and drive it from Daytona Beach, which is usually a two hour drive. However, it ended up taking him over five hours because the van couldn’t go over 50mph, nor did he want to go any faster for safety’s sake!”

Having arrived (eventually!) the bus’s bodywork was lovingly repaired in the dealer’s dedicated bodyshop. It turns out that Mike employed a young man just for this project – and it took him over three months of daily, painstaking work to complete.

The tank itself sits about 6-8in below the side window level and pumps, sumps and filters were installed out of sight on the van’s floor. Alas the van cannot be driven as the engine had to be removed to make room for the pumps, sump, chiller and filter. Oh, and sections of 4x4s had to be placed under the axles because the existing rear suspension setup couldn’t withstand the weight of the water.

At present the tank has been removed, but will eventually be filled again and the van will take pride of place in the new Fort Pierce VW dealership when it is opened in March 2015. We can’t wait to see it, and nor we imagine can the Dub loving folk of Florida. Indeed, several intrigued visitors have already traveled from across the US to see it, with the hope of being able to sit in the cab and have their photo taken with the aquarium behind, only to be disappointed.